We’ve been in Bradenton over a week now, getting ready and waiting to move. 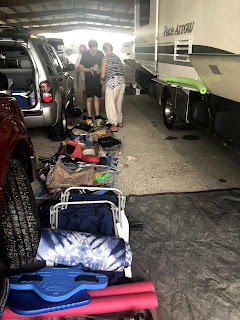 We pulled into the storage lot on Saturday and made the materials transfer from Big Red to the Big Rig.  Every bin inside and out was emptied, with contents considered and restored or replaced.  In the end we only filled 70% of the space so we have ample room to accumulate.

Bill had the foresight to put the coach in Lake Manatee State Park, a few miles down SR-64 to check to see that everything is working as it should. Eric took the opportunity to upgrade the entertainment system and troubleshoot the Kwikee Step that failed to deploy leaving us in deep up-lunge entry mode.

In past trips we were limited to one or two channels on the old tube TV, and when there was park cable, we weren’t always successful at navigating the converter box hooked to the VCR to watch it.  It was time to go digital. Our resident handyman reconfigured the space for a 32″ flat screen with surround sound and roku hookup, picking up 40 OTA channels with an amplified antenna.

The electronic step that comes down to board the coach has been an intermittent issue for some time.  A repairman made several house calls, checked the cable connections and replaced the motor, but still, the step would not comply.  After several hours of detective work under the coach and on the internet, Eric landed on a faulty control unit and ordered up a new part on Amazon Prime. Delivered late Friday night, he could barely sleep and the anticipation of the big fix had us up and down the road to Wawa for a 5am cup of coffee and waiting for Saturday morning daybreak. The engineer is having funstration (fun+frustration) solving this puzzle.  Stay tuned …

In between coach outrigging projects, we took a swing lesson from Coach Z,  played pool paddle ball, ate at the Sage Biscuit with Helen, got rained out on 3rd of July fireworks, teamed up with Bill and Eileen in a Fourth of July scramble, procured new tires and battery for the soldier ordered to Ft. Meade and got a Paul’s Barbershop haircut for Eric – “If your hair is not becoming to you, you should be coming to us.”  We patronized the local Goodwill, where Sheri nostalgically bought a $10 pair of roller skates, put them on and quickly realized 51 is not the new 11 and donated them back again. We went on a fishing expedition (literally) to acquire tackle while Sheri got a rig and cast lesson from Eileen at the park.

Feels like we are ready to move after couples golf last night, where Bill landed a picture perfect 240 yard drive on the 9th hole on an easy breezy temperate evening at the Stoneybrook Golf Course. Today is Sweden v England at World Cup, Round of 32 at Wimbledon and a family cookout before we settle into the coach on Sunday to kick off Leg 1 of the Reboot Retreat on Monday.

Cause these are the good ol days ….